The Fluoride Crisis & Beyond

As the postwar era marched on, major world events also began to influence views on public health. This included one of the most important political developments of the 20th century, the Cold War. A decades long conflict between the Soviet Union and the United States, the Cold War often provoked mass hysteria and distrust. Some individuals began to question the validity of scientific expertise and the authority of health officials. In turn, there was a growing tension over how to address health concerns. 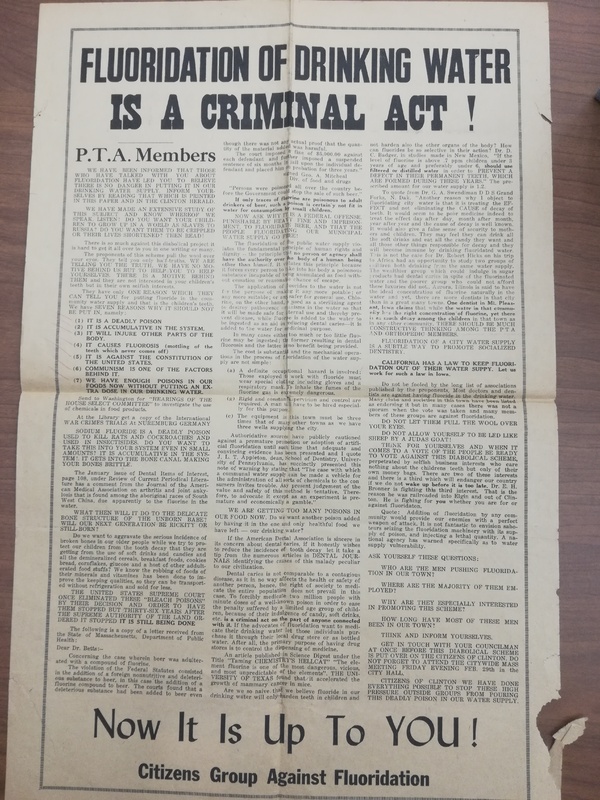 A poster describing the fears of fluoridation by the Citizens Group Against Fluoridation circa 1950s. Photo courtesy of the Wisconsin Historical Society. 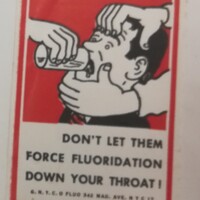 In the late 1940s early 50s, Wisconsin municipalities began to research and debate adding sodium fluoride to city water supplies. Fluoride prevents tooth decay, but only when introduced at young ages. Dentist John G. Frisch of Madison was an early supporter of fluoridation and traveled around Wisconsin to push cities towards fluoridation. Frisch conducted a survey in 1947 of Madison well water before fluoridation, and one after fluoridation in 1951, documenting its effects on children’s dental health. The study found dental decay went down 73 percent with fluoridation.
Despite overwhelming evidence of fluoride’s positive effects on dental health, members of the public and city officials fomented resistance. In La Crosse, it took years for the city council to decide on fluoridation, ultimately implemented in 1953. This resulted in public outrage, and a referendum in 1954 overwhelmingly rejected fluoridation. Many over exaggerated the dangers.
In letters to the editor of the La Crosse Tribune, readers voiced concern that fluoride is harmful in large, concentrated dosages, or that fluoride was prohibited in being fed to livestock—inciting fear that a mechanical failure would lead to mass poisoning. Some residents questioned the legality for a municipality to add fluoride to public water.

"Do you want your children to grow up in a world as slaves to Russia?"

But it did not end there. A local anti-fluoridation group spread conspiracy theories proclaiming fluoride  a “deadly poison” and a "communist" plot aimed at making local children "slaves of Russia.” One of the most prominent critics of fluoridation, biochemist John Yiamouyiannis, claimed a connection between fluoride and cancer.
Despite these claims being resoundly debunked by the scientific community, conspiracy theories have lingered.  As recently as 2018, Lake Delton WI discontinued fluoridation, a decision widely criticized by local dentists. 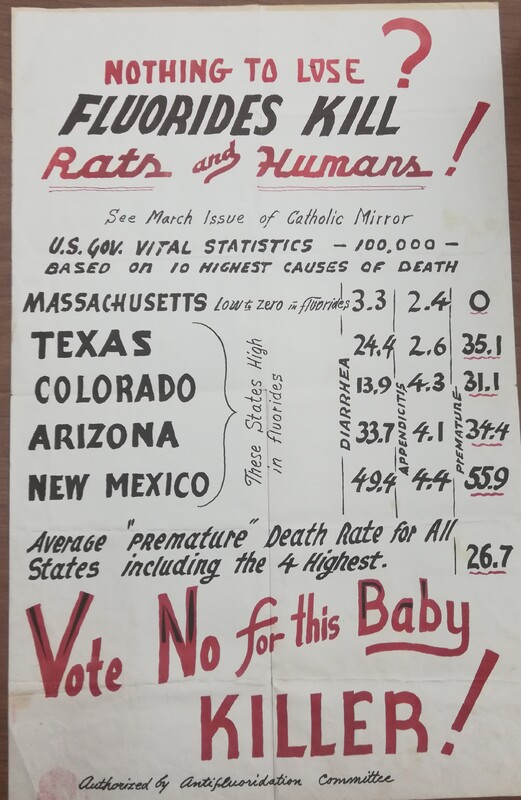 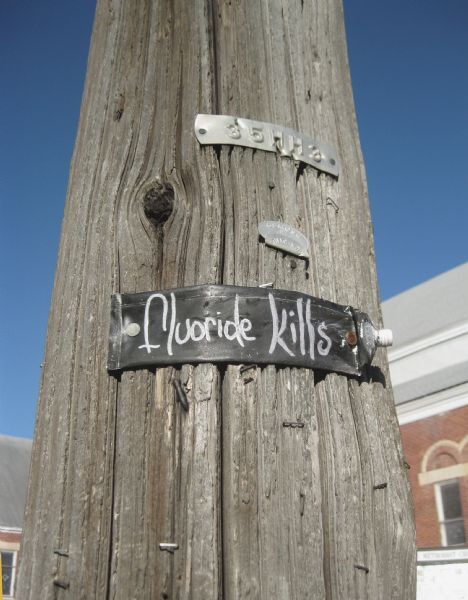 By the 1970s, views on public health began to change. Vietnam, Watergate, and the Oil Crisis soured public faith in government authority. Deindustrialization eroded the confidence in the economy of the United States. For some, civil rights reforms produced anxiety and cultural backlash. And while major world organizations continued to crusade against infectious diseases, like the World Health Organization (WHO) campaign to end smallpox, many individuals had grown accustomed to the relative prosperity brought by successful public health initiatives. In the United States, people were living longer than ever. But some of their trust in authority had grown shorter.
Prev Next