Opioids in the Midwest 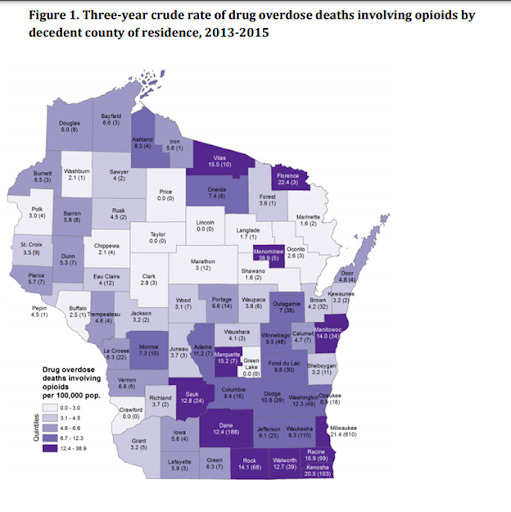 Opioid overdoses by county in Wisconsin. Map by the Prescription and Nonprescription Opioid Harm Prevention Program.

Starting in the 1980s, pharmaceutical companies began heavily marketing opiates such as OxyContin and Vicodin in record amounts for chronic pain. These companies focused more on profits than the dangers of these drugs, effectively downplaying the profound risks they posed to individual and public health. As a class of drugs derived from opium—a heavily addictive substance from the opium poppy, and the key ingredient to drugs like morphine and heroin—opiates proved highly addictive.
By the early 2000s, soaring rates of opiate overdoses made the crisis impossible to ignore. Rural counties in the midwest saw a 1,600 percent increase in opiate usage in the past two decades.
Since the early 2000s, opioid mortality increased 577 percent in Wisconsin. Rural communities face greater challenges due to the lack of healthcare options for drug addiction and mental health issues. For example, lack of access to healthcare led to an increase in drug diversion, or family members passing someone else an unused prescription.
In addition, a major reason for opioid use in rural areas is the lack of economic opportunity. Simply put, many people lack sufficient economic means, a living wage, or the opportunity to leave, and opioid usage can become an attractive coping mechanism. Compounding this is the fact that opioid addiction was not widely seen as a public health crisis until recently.

"The chaos, the dysfunction, the hurt, the worry; it became too much to bear..." 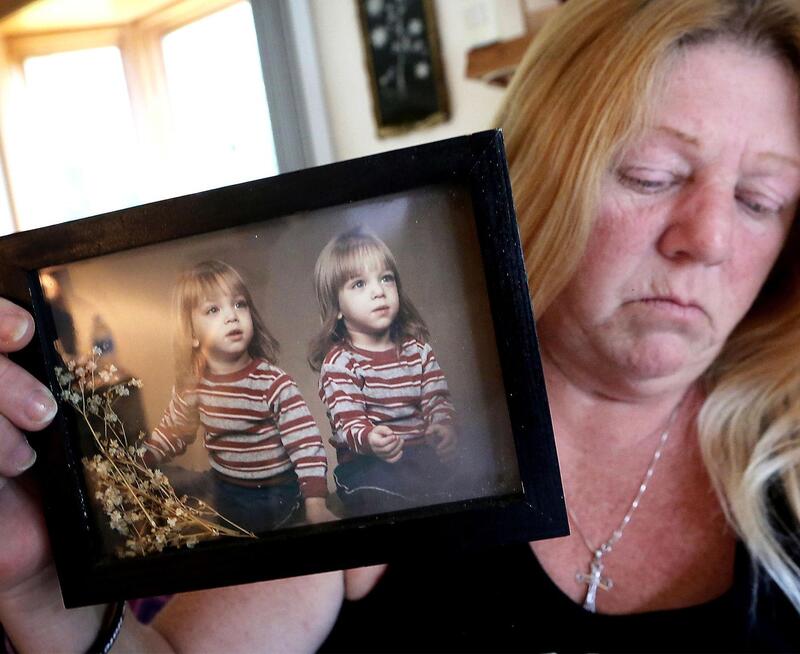 Sherri Smith, of Portage, WI, holds a photo of her twin sons, Tony and Jesse as children. Tony Sparks died in 2005 at age 23 from an overdose of alcohol and methadone; his brother Jesse died from an apparent heroin overdose in 2016 at 34. John Hart/ Wisconsin State Journal Archives.

By the mid-2010s, local communities and law enforcement began advocating for a change. In Douglas County, police organized public discussions on opiate abuse  and treatment options. During a 2016 meeting, one parent described her struggle taking care of her drug addicted son: "I love my son, and I will never give up. He knows that, but I needed help too," she said. "The chaos, the dysfunction, the hurt, the worry – it became too much to bear.”  Unfortunately, due to inadequate access to health services, many addicts can only detox while in county jail.
In 2016, former Wisconsin Governor Scott Walker labeled the opioid crisis an “epidemic” and created a task force to focus on the  “devastating impact” of opioid abuse and the need for more treatment solutions. The task force noted a 12 percent decrease in opiate prescriptions across the state, but failed to  mention the use of street drugs. Regardless of local, state, or federal actions to help drug addiction, overdose deaths are still on the rise in Wisconsin and the country as a whole. 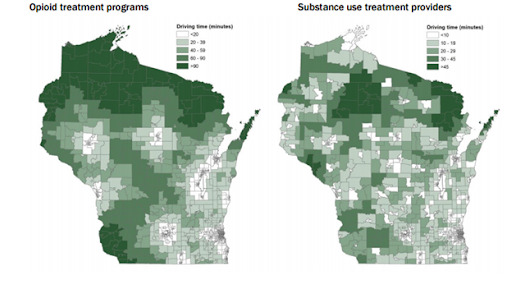 Opioid treatment center distance and locations in Wisconsin. Map by the Wisconsin Department of Health Services.

With significant media and political attention, doctors have begun to limit opioid prescriptions. The public now understands the dangers of prescription opiates and are more likely to seek help from medical professionals for addiction. At the same time, stricter access to prescription opiates has led to a surge in heroin use, as those who became addicted to opiates seek relief. Overdoses from heroin continue to rise in Wisconsin, and rural clinics still lack the resources to treat addiction.